Macsa ID will take its laser equipment to Southeast Asia 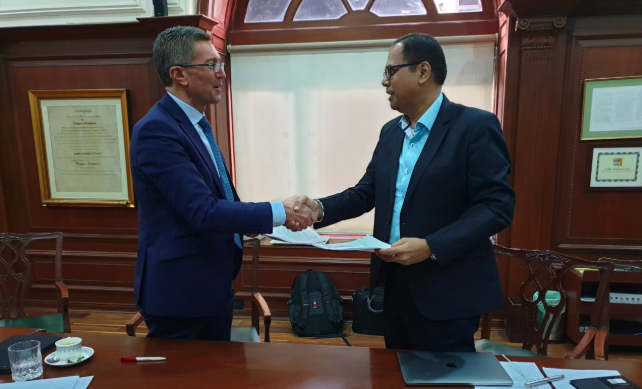 Macsa ID signed 50% joint venture with Forbes, part of the Indian conglomerate Shaporji Pallonji, owned by Mistry Pallonji, the majority shareholder of Tata and one of the most important entrepreneurs and philanthropists in the world economy.

This agreement will allow our company to produce and market their coding and marking laser equipment in India and SAARC countries (India, Afghanistan, Bangladesh, Bhutan, Maldives, Nepal, Pakistan, Sri Lanka). Forbes has already successfully marketed Macsa ID equipment in the Asian market to multinationals such as Colgate, but the possibility of producing lasers locally will give them a clear competitive advantage as it becomes the only company in the country with capacity to produce laser equipment of such a high technological level.

Founded in 1767, Forbes & Company Limited is one of the oldest companies in the world still in operation. It is currently part of the Indian conglomerate Shaporji Pallonji owned by Mistry Pallonji, the majority shareholder of Tata and one of the most important entrepreneurs and philanthropists in the world economy. The Shaporji Pallonji group, one of the largest industrial conglomerates in India, had a turnover of more than 16,000 million dollars in 2018 and grows at an annual rate of 22%.

As for Forbes, it sought to reach an agreement with a company that could provide the necessary technology to develop laser equipment to mark and code products in the Indian market and its area of influence. In view of the great acceptance in Southeast Asia of our lasers and being aware of our world leadership in technology, they decided to sign the joint venture with us. After the agreement, both companies will go on to produce and market laser equipment to mark and code products for productive industries such as food, beverages, cosmetics, pharmaceutical, Fast-Moving Consumer Goods (FMCG), automobile, electronicsor textile throughout the SAARC market.